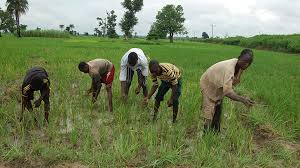 The Central Bank of Nigeria (CBN) says it will fund 1.6 million farmers in the 2020 wet season across the country.

Speaking at the flag-off of Farm Inputs Distribution for cotton farmers for 2020 planting season on Tuesday in Kwali, Abuja, CBN Director, Development Finance Department, Mr Yila Yusuf, explained that the bank would finance the farmers under the bank’s 10 focal commodities which would cut across the value chains.

Read Also: 18+ Cardi B Posted video of Herself Getting a Pu*sy Wax

The Director, who was represented by Mr Ayoola Quadri, said the step was to create an impact that would guarantee food security in the country.

He said that the farmers were expected to pay back the loan given by CBN under this anchor borrowers programme.

He disclosed that the apex bank had reduced the interest rates paid on the loan from nine per cent to five per cent because of the COVID-19 pandemic.

He said the CBN was working hard to revive Cotton Textiles and Garments industry to create jobs and boost the economy of the country.

He explained that with the commitment of the bank in 2018 on cotton production, the textile industries in 2019 were self-sufficient as cotton used during the period were sourced within the country and even left some in warehouses.

“CBN is trying to bring back the glory of textiles of those days where the industry used to employ 10 million people across the country.

“In the 80s, we lost that glory because of smuggling where our country was turned to a dumping ground of textiles materials. It is an unfortunate situation, about five billion dollars was spent annually on the importation of textiles” he explained.

He added that the apex bank was doing backward integration to ensure that the entire value chain in the industry was funded for the benefit of the people and the country.

In his remarks, the President of the National Cotton Association of Nigeria, Mr Anibe Achimugu thanked President Muhammadu Buhari and CBN Governor, Mr Godwin Emefiele for their interventions in the sub-sector.

Achimugu noted that with the loan facilities provided by CBN, the farmers were now witnessing the turn-around in the production output.

He urged beneficiaries to pay back the loan to enable others to benefit while expressing hope that more people would be brought to the scheme in 2021.

The president said about 2,200 farmers who were grouped into clusters had benefited from CBN’s intervention in the Federal Capital Territory (FCT).