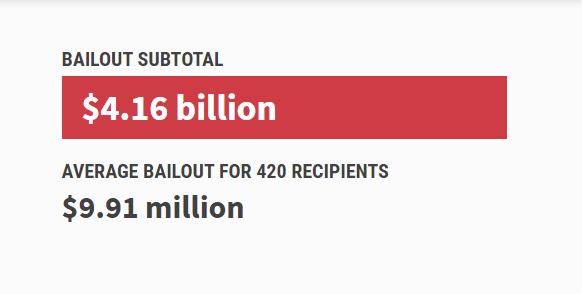 Covid bailout tracker is a nonpartisan watchdog group that is uncompromising in search of the truth. And the group is committed to making sure public officials are advancing policies in the public interest, across a wide range of issues.

What Covid bailout tracker – Accountable.US does?

They follow the money to explain the government’s actions and motivations.

They work to understand who has the most to gain or lose in policy fights.

They also use creative communications and campaigns to make sure Americans understand why their government is taking the actions it is.

And when these actions are hurting the American people, we give Americans the tools they need to make their voices heard.

How About Accountable.US – Covid bailout tracker?

Accountable.US Action is an independent, nonpartisan, not-for-profit organization that serves as the advocacy and political arm of Accountable.US.

Reinforcing our work to hold policymakers and special interests accountable and exposing government malfeasance, Accountable.US Action engages in both educational and electoral activity including legislative advocacy.

The Trump Small Business Administration’s ‘Paycheck Protection Program’ established under the CARES Act was billed as a lifeline for small businesses struggling to survive the historic COVID-19 health and economic crisis. Yet since the program’s introduction, multiple large, publicly-traded companies – many taking advantage of a special interest loophole – have been revealed to have claimed tens of millions of dollars in taxpayer assistance meant for Main Street businesses on the brink of bankruptcy. All of this happening amidst a stunning lack of transparency from SBA.

Meanwhile, the program has been plagued with reports of legitimate small businesses  — especially those owned by people of color — that were unable to access the help the President claimed would come in “record time”. They have faced a bureaucratic maze often ending in delays and rejection as banks reportedly prioritized those “with the best relationships — not the neediest or most deserving.”

Instead of getting money into the hands of those who need it most as quickly as possible, the PPP program burned through its original funding in a matter of days while dozens of large firms, some worth more than $100 million, reportedly received millions in taxpayer aid. Among them were several large-restaurants and hotels that pay their executives millions and have access to credit and capital streams unattainable to most small business owners.

And it will continue to happen – until Congress or the Trump Administration brings more transparency and fairness into the process.

As the COVID-19 crisis ravaged the American economy, airlines were among the first industries to receive government aid to soften the blow. Under the CARES Act’s $500 billion fund for large corporations, a $32 billion Payroll Support Program was carved out specifically for the aviation industry, with few strings attached.

As a result, American taxpayers have financed bailouts for airline companies to the tune of tens of billions of dollars, regardless of whether the company reported recent stock buybacks rewarding shareholders, or billion-dollar profit margins, or multi-million dollar executive compensation packages. Several luxury private jet companies have also benefited greatly from the program under the direction of the Trump Treasury Department, some with financial ties to President Trump himself.

But despite a Congressional increase in funding for the program, it became overwhelmed, struggling to process and disburse loans in a timely manner and providing changing, confusing guidance to applicants. The changing policies and delays threatened the health of struggling businesses – as the Trump-tied and ultra-wealthy continued to benefit from programs meant for Main Street businesses.

The delayed and disorganized rollout wasted taxpayer dollars and continues to raise serious questions regarding the SBA’s internal chaos, reports of fraud applications, and lack of transparency in a time when small businesses seek stability and economic security.

The Federal Reserve’s Main Street Lending Program, an initiative designated by the CARES Act, was created to help midsize companies weather the coronavirus pandemic. The program has the capacity for $600 billion in loans, yet it’s riddled with narrow and murky requirements that have decreased participation among both banks and borrowers. Because of these issues, only 13 companies had gained approval as of August 2020 – a total value of just over $92 million (.015% of the program total).

All in all, many businesses either can’t or won’t apply: small businesses are spooked by mountains of paperwork, while larger businesses realize there are more attractive private options at their disposal. This, among other reasons, is why a key congressional oversight official has called the Main Street Lending Program a “failure.”

Now, billions of taxpayer dollars are sitting untouched due to bureaucratic chaos when they should be funneled back into struggling companies and communities hit hard by the pandemic.