The N-Power Validation Registration has Commence for N-Power Agro Beneficiaries. Beneficiaries will receive mail from the Npower Official Email address.

This update was made through Npower official Instagram page whish read below.

Read Also: How to Withdraw Money From the ATM without Using a Card


If you have received an email from the link below, kindly fill with your details. This has been authorized by us.

For more update about Npower, kindly subscribe to our newsletter emailing or use the comment box to reach us.

If you haven’t Receive Your Npower March &April Stipends, Kindly Do this

Nneka Ikem Anibeze, the new appointed Special Assistant on Media and Publicity to the Hon Minister Sadiya Umar Farouq made this known few hours ago in a report on the National Food Security Council Meeting supervised by HM @Sadiya.farouq

“Who made a presentation on the “Role of Humanitarian Affairs in Aiding Food Security.

The presentation highlighted the initiatives of the Ministry to provide shock responsive social safety nets through immediate food relief and long-term sustainability through “Zero Hunger”.

This will payment of 14,000 volunteers rejected by GIFMIS easy and fast

Sadiya, in a talk show, disclosed that she has signed off payment of both Batch B, and that payment is no longer in her jurisdiction but in the of Accountant General of the Federation (AGFs) 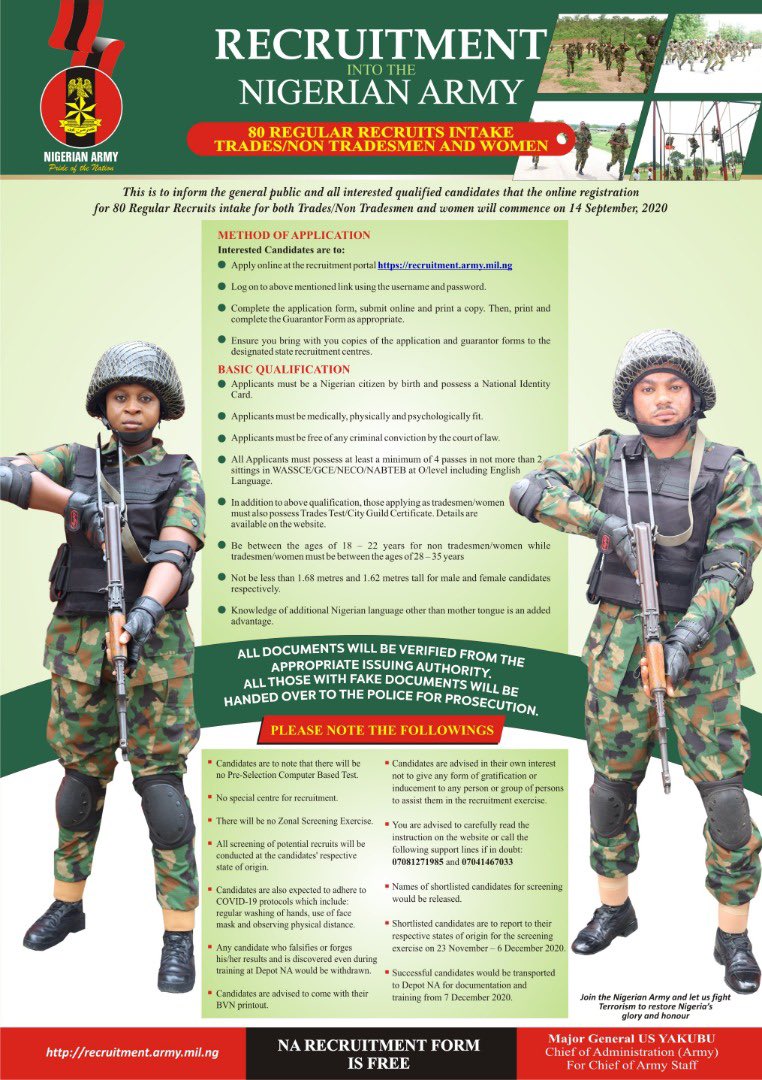 This is to inform the general public and all interested qualified candidates that the online registration for Nigerian Army Recruitment 80RRI 2020 for both Trades/Non-Tradesmen and women will commence on 14 September. 2020.

The online registration for Nigerian Army 80 Regular Recruits Intake, Nigerian Army (NA) for both Trades/Non-Tradesmen and Women will commence on 14 September 2020.


On this guide, you will learn the requirements you need to apply for the Nigeria Army Recruitment 80RRI 2020 Application.

You can apply for the Nigerian Army Recruitment form 2020 by following the instruction bellow:

PLEASE NOTE THE FOLLOWING THAT WILL TAKE EFFECT ON THE NIGERIAN ARMY RECRUITMENT 80RRI 2020 APPLICATION PROCESSES:

Exited volunteers of the Npower Programme will not get their pay this week as the Office of the Accountant General of the Federation is yet to approve payment.

The office of the Accountant General of the Federation (AGFs) is conducting final checks and payments, this will take some time to pay all the 14,000 volunteers rejected by GIFMIS

Sadiya, in a talk show, disclosed that she has signed off payment of Batch B and that payment is no longer in her jurisdiction but at the office of the Accountant General.

Because of the change in payment Platform, it was discovered that some names also appear in other government payment vouchers

But the Office of the Accountant General of the Federation is still working on payment protocols, to allow all owed and exited volunteers to be paid at once, and with ease

Volunteers are advised to exercise more patient, in no distant time, within the month of September, this issue would have been resolved


This is because of complains rising from GIFMIS rejection of over 14,000 genuine volunteers, who have suffered months without payment must be sorted out

Nneka Ikem Anibeze, the newly appointed Special Assistant on Media and Publicity to the Hon Minister Sadiya Umar Farouq made this known few days ago in Abuja.

“Until her appointment, Nneka Ikem was the Acting Director, Sports and Outside Broadcasts Directorate of the Federal Radio Corporation of Nigeria.

She also served as SA Media and Publicity to the immediate past Minister of Youth and Sports, Barrister Solomon Selcap Dalung.

The new SA to Sadiya Umar assured volunteers of speedy payment of backlogs to over 14,000 volunteers rejected by GIFMIS.

Immediately the payment protocols are solved and done, all exited volunteers would receive their earned stipends and backlogs, SA added