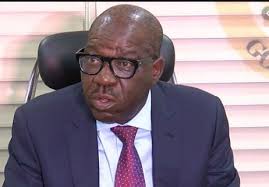 If you have been following up with the politics happening in Edo State, you will observe new things come up basically every day. The latest is the issuance of a new NYSC certificate to Governor Obaseki.

Recall Governor Obaseki was disqualified by the APC screening committee for discrepancies in his credentials. Days before he was disqualified, there was an argument over the authenticity of his university certificate.


The institution, University of Ibadan later came out to confirm that the governor is an alumnus of the school. Despite the university’s clarification, Governor Obaseki was disqualified based on inconsistencies in his Higher School Leaving Certificate and NYSC.

On his NYSC certificate, the APC screening committee said though it wasn’t faked, there was a typo which governor Obaseki refused to correct. It was said that the name ‘Obaseki’ was wrongly spelt as ‘Obasek’.

In the latest development, the NYSC problem has been resolved with the commission issuing the governor a new certificate. This is a victory for the governor as he has been threatened to face legal battle and litigation if he wins the election with the discrepancies in the certificates.

Get up to 300,000 Loan without Collateral from FairMoney