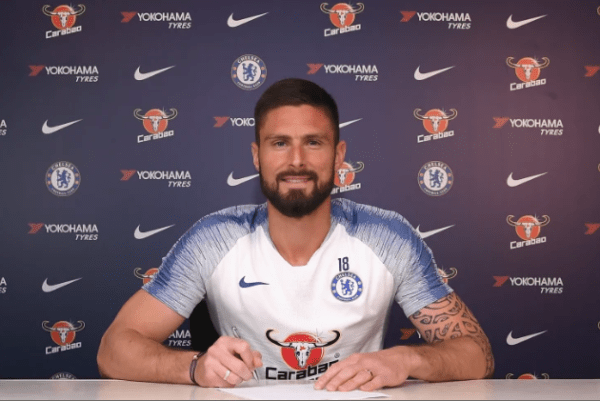 Olivier Giroud has signed a contract at Chelsea that will keep him at the club until 2020. The centre-forward joined the club during the January transfer window in 2018 and has so far made 62 appearances and scored 17 goals.

Giroud as a Chelsea player won the World Cup winner with France and has contributed a great deal in Chelsea’s run on the European stage at club level, scoring 10 times in the Europa League this season while helping the team through to the final against his previous club Arsenal.

Speaking to the Club’s website after signing the extension, Giroud said: ‘I am very happy to sign a new contract. I really wanted to stay at least one more year – I have felt a part of the team, the family, since the beginning and hopefully, there will be more trophies to come.’ Chelsea director Marina Granovskaia added: ‘We are very pleased that Olivier will be a Chelsea player for another season. Since joining us 18 months ago, he has at times had to be patient and wait for opportunities but has still been able to make a positive contribution to the team.


‘Whether it is his unselfish link-up play or his 10 Europa League goals this season, he has been a crucial member of the squad and we hope he will be able to pick up a second Chelsea winner’s medal in Baku later this month to accompany last season’s FA Cup win.’

A statement by the club further revealed that the outstanding moment from Giroud’s first season as a Blue was at Wembley in the Cup semi-final. He skilfully slalomed through the Southampton defence to open the scoring and subsequently led the front line in the final against Manchester United, lifting the trophy for the fourth time in his career.

Other notable goals from last season include two in a memorable late fightback to win when Southampton was also the opposition and the only goal in a home victory over Liverpool.

This season, the 32-year-old’s Europa League goals include a ‘perfect’ hat-trick away at Dynamo Kiev, a right-foot strike, a left-foot one and a header.

Giroud is the 2018/19 tournament’s joint top scorer and is the first Chelsea player ever to reach double figures for goals in a single season of European football.

Flying Eagles In Confident Mood As Team Arrives At Poland