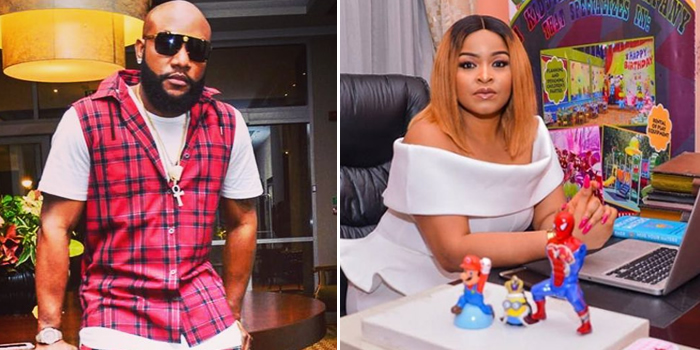 Singer Kcee and his wife, Ijeoma, are still keeping their marriage and family out of social media.

The couple avoid being seen together at events, they avoid showing anything about themselves on social media and they don’t even follow each other on social media.

To celebrate their son, Kanyechukwu’s 7th birthday today, Ijeoma has taken to her Instagram page to recount the day of his birth.

“My little Prince is 7 today �
It was on Mother’s Day,I had felt the contractions all day but I didn’t want to spoil people’s mood so I allowed everyone to party till night. When we got to the hospital that night,the nurse on duty did the routine check up and asked me to go home that it wasn’t yet time… As we were walking out of the hospital,the dr on night shift was just resuming. Immediately he saw me belle and my oversized stomach,he automatically asked them to give me a room!
They tried everything possible for me to have a natural birth including inducing me and soaking me in a bath yet nothing happened.

On Tuesday morning,the head medical director sent for me,as I sat in his office that day,he looked me in the eyes and told me the one thing I was dreading “you’re going to have a cesarean section “ I started wailing � if you’re a Nigerian,you would understand the misinformation been spread about birth by CS ��‍♀️
As the nurses tried to console me,the dr asked them to allow me cry,that crying is good for the soul! Immediately my tears dried up and I gave him the look �there and then I signed my consent forms and I was wheeled into the theatre.

The drama that took place inside the theatre is story for another day but all I know is GOD LOVES ME.

After about 2 hours,I gave birth to a healthy 4.75kg handsome hairy charming prince.
Seeing him and holding him in my arms made the struggles of the past 42weeks fade away.

Kanyechukwu was so cute that the nurses wouldn’t leave him with me except it was time for me to feed him. Even while I’m breastfeeding,they would stand by the door waiting for me to be done.
After spending about a week in the hospital,I was tired and begged them to discharge me that I was ready to go home.
Just as we were preparing to leave,I was informed that a camera crew from the city zeitung newspaper were there to interview me and take pictures of my baby and I because my Kanye has been tagged the baby of the month in our city!
There and then I knew I had birthed a superstar and his days will be great!

Happy birthday Son,you are a star and nothing or nobody can dim your shine. We love you �“