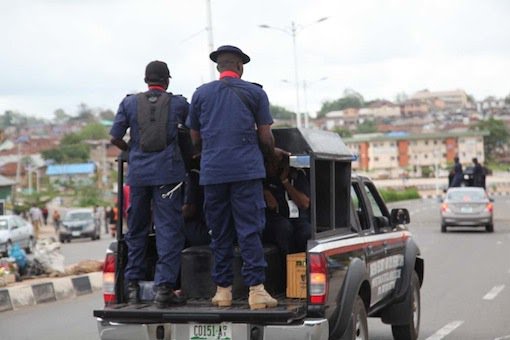 The Taraba Command of the Nigeria Security and Civil Defence Corps (NSCDC) has arrested two suspects for allegedly defrauding students at an illegal Joint Admission and Matriculations Board (JAMB) registration centre.

Alhaji Aliyu Ndanusa, the Taraba Commandant of NSCDC disclosed this to newsmen at the corps’ headquarters in on Saturday.

According to him, the government approved price for JAMB registration was N4,000 while the two suspects were charging students N4,200 in contravention of the directives.

Ndanusa said that the NSCDC would not sit back to allow fraudulent persons to defraud the unsuspecting members of the public.


He said the two were arrested following an outcry by JAMB officials in the state over the activities of unauthorised persons defrauding students of their hard-earned money.

“Operatives of the NSCDC have been recently trained at a workshop for the purpose of monitoring the registration centres to ensure that they comply with the FG’s directives of N4,000 registration fees for JAMB.

“Anybody who adds any amount to this has already contravened the directives and will be made to face the wrath of the law,” he said.

Ndanusa said the suspects would be charged to court immediately after investigation.

How To Check NYSC Batch A Senate Approved List 2020