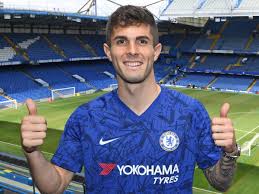 Christian Pulisic says he wants to make the same impact that Eden Hazard has had at Chelsea and hopes to play alongside the Belgium superstar at Stamford Bridge.

The US international signed a five-and-a-half year contract with Maurizio Sarri’s team in January but was immediately loaned backed to Germany to finish the season at Borussia Dortmund.

“It is incredible to see what Eden can do,” Pulisic, 20, told the BBC. “He (Hazard) is a guy to look up to and what I would love to become.

“It is definitely a goal. Any player would be dumb not to want to be in the same team as him.”

But the £58 million ($73 million) signing appears unlikely to get his wish to play alongside Chelsea’s star man, with Hazard persistently linked with a move to Real Madrid.

“I don’t want to be looked at as someone who is the youngest to do this or that,” said Pulisic, who is both the youngest player to captain the United States and to score for them in a World Cup qualifier.

“I just want to be an established player and someone people respect, who is successful in this league.

“It is completely new to me and something not a lot of American players have experienced.”

Pusilic spent part of his childhood in England and relished the football culture.

“I soon realised how much people over here loved the game. To be in that culture and get thrown right in just grew my passion even more,” he said.

“Every day after school I was on the court playing.

“I would go to games with my dad, including one at Chelsea. I don’t remember how old I was but it would have been around the time Jose Mourinho was there.

The fans were screaming and yelling. The atmosphere was fantastic. I had never seen anything like it.”