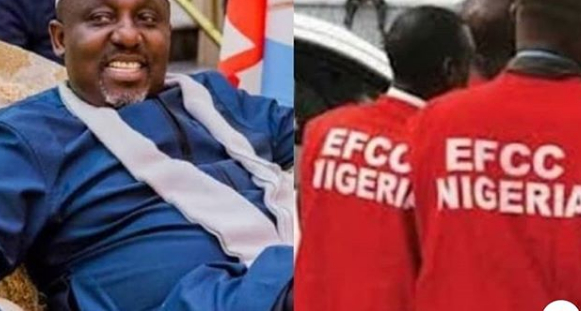 The troubles of the outgoing administration of Rochas Okorocha in Imo State are far from over as the Economic and Financial Crimes Commission (EFCC), yesterday, said that it is investigating a case of money laundering against it during the last governorship election in the state.

EFCC’s zonal head for South East, Usman Imam during a briefing disclosed how their operatives, acting on tip-offs, blocked accounts belonging to the state government in the build-up to the election.

He spoke while highlighting the activities of the zone in the first quarter of the year, Imam said their timely intervention saved the state over N5bn that would have been deployed for vote buying by the Okorocha’s administration.

He revealed that about N8bn from the Paris Club Refund bailout meant for payment of workers’ salaries was warehoused by the government, only to begin frittering it on the eve of the election for phoney reasons, prompting the anti-graft agency to block the accounts.

“About N7.9bn is what had been blocked, although with pressure, subsequently, about N2.5bn was released for salaries. On the whole, we have over N5bn of those funds blocked; we are following up to see what actually happened.

Honestly, what we discovered was that within two days, N700m was withdrawn in cash; N200m on the first day and N500m on the second day and all these monies were disbursed in a manner that was honestly unpalatable. Distribution to school teachers; I don’t know, schools that you were not funding and you wake up on the eve of the election and withdrew N500m cash and start distributing N1000 each or so to teachers. Whatever that means, I don’t know.

“When we came in, we were able to save about seventy something millions of the funds that we discovered were not disbursed, we also blocked it. People are still answering questions as to who asked them to move those monies, monies that were blocked at the banks.“The sad story about this was that these monies were the intervention funds; the bailout funds that the Federal Government released to states to pay salaries when they were having problems paying salaries. They didn’t utilize that money to pay the salaries; they warehoused it and kept it until the election period, they started attempting to draw down the money. Whatever happens, we have saved over N5bn of that money, as we talk, two weeks to handover. Probably, the next government would have that money to use it better. There are a lot of other general investigations going on in Imo right now,” he stated.

He said the directive by EFCC Acting Chairman, Ibrahim Magu for proper monitoring to forestall money laundering during the election actually paid off.

He also said that the zone had in the course of investigations from January till date, recovered the sum of N102, 322, 630; and USD6, 450.
In addition, he stated that investigations were on to ascertain whether the 30 different brands of cars they seized were actually proceeds of crime or not.

The zonal head who said they received a total of 557 petitions in the period under review noted that 127 of them were approved and under investigation, while 230 were rejected on the grounds of being civil in nature, falling under other agencies’ mandates or already in court.
He announced that the commission has recorded 28 convictions this year as against 14 in 2018, adding that 45 of the cases were fully investigated and suspects charged to various courts in the region.

However, the EFCC is contending with 16 civil suits emanating from the zone, he added.