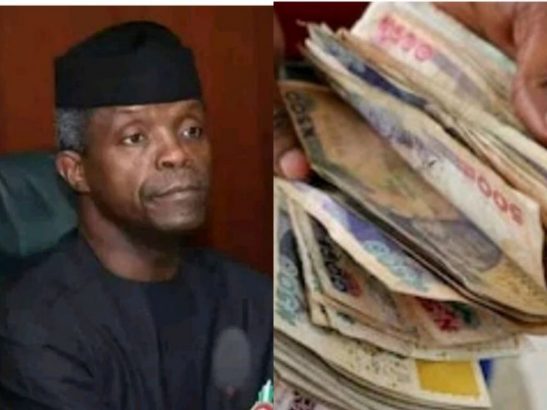 Vice President Yemi Osinbajo has said that the various intervention programmes of the Buhari administration since 2015 to date are designed and implemented to improve the health, education and socio-economic conditions of the Nigerian people, especially women, children, and youths.

This is as he urged youths to get involved in politics; saying that, while they can achieve so much as civil society, the government still holds the ace in terms of capacity and resources to bring social good.

Osinbajo said this on Thursday in Abuja at an event to mark six years of the Future Assured programme, an initiative of the Aisha Buhari Foundation.

Senior Special Assistant to the Vice President on Media and Publicity, Laolu Akande, disclosed this in a statement titled, ‘How we focus on health, education, women empowerment & youth interventions – Osinbajo’.

According to the Vice President at the Future Assured event, “the very future of Nigeria and our communities depend on how well we address the many concerns of women and children in our communities, especially the focal areas of health, education and economic empowerment.

“We agree with Future Assured’s belief that all social indices can be influenced if the health, education and economic status of the population are improved upon. And that is the case women constitute half our population and the youth are at least 60% of that population. Women especially, young girls, continue to face problems of every kind and this problem mutate as the social pressures increase every passing day.”


He further explained that since 2015, the regime has ensured that the government’s social and entrepreneurial programmes have an affirmative component for women.

“So, of the 2.4 million beneficiaries of the Government Enterprise and Empowerment Programme, 1.2 million were women – that is 56.4% of beneficiaries.

“A total of N38billion in loans has been disbursed over the last 4 years. Of the 1.1 million beneficiaries of the Conditional Cash Transfers, over 98% of beneficiaries are women,” the Vice President disclosed.

“We implemented a payroll support programme which was designed to mitigate income losses in the wake of the Covid-19 pandemic, and of the 307,173 employees that have benefited, 130,880 or 43% of beneficiaries are female-owned businesses.”

“All of these are deliberate affirmative action to ensure that women benefit proportionately,” he said.

In addressing violence and other abuses against women, Osinbajo said “in November 2019, to enhance access to justice, we secured a toll-free emergency number and shortcode for the FCT- SGBV Response Team, with the generous support of Airtel.

“We also developed Referral Guidelines for Gender-Based Violence Response in Nigeria and a National Guide for the Establishment of Sexual Assault Referral Centres in Nigeria, to further enhance coordination.”

“Also in 2019, the President directed the National Human Rights Commission to set up a special panel to investigate cases of unlawful arrests, assault and Sexual & Gender-Based Violence in the Federal Capital Territory following complaints of raids of night clubs and arrests of women by the Police.”

Commending the Future Assured programme for the impact of its interventions across health, education and social welfare, Prof. Osinbajo said “it certainly has been an exciting 6 years”.

Aside from the First Lady, Aisha Buhari, other dignitaries present at the event include the wife of the Vice President, Dolapo Osinbajo; Governor Yahaya Bello of Kogi State; Minister of Health, Osagie Ehanire; his counterpart in the Niger Delta Affairs Ministry, Godswill Akpabio, and top United Nations officials, among others.