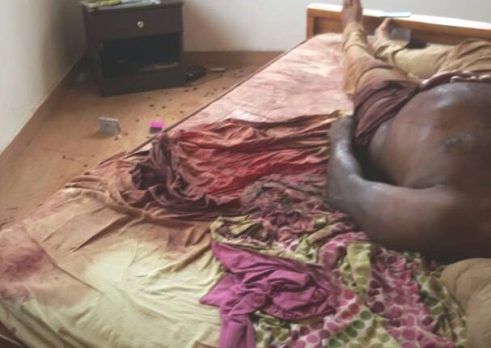 The Lagos State police command yesterday arrested one Mrs. Udeme Odibi, a lawyer, for allegedly butchering her husband with a kitchen knife and then attempting to kill herself, in their home at Diamond Estate, Sangotedo area of Lagos.

The suspect, a native of Akwa Ibom State, was said to have butchered the deceased, Mr. Otike Odibi, a native of Kwale, Delta State, with a knife and even cut off his genitals before proceeding to kill him.

After she was done with him, she attempted to kill herself but her efforts were thwarted by neighbours, who rushed her to the hospital.

Confirming the incident, the state Police Public Relations Officer (PPRO), Chike Oti, said when the Divisional Police Officer (DPO) received the distress call, they swung into action but found the deceased in a pool of his own blood.

He said: “Based on the information, the DPO mobilised a team of detectives to the scene where they found the man lying on the bed in the pool of his own blood, with his stomach ripped open exposing the intestine.

“As if that was not enough, the killer severed his genital and placed it on his right hand. However, before the arrival of the police, Mrs. Udeme, who had unsuccessfully attempted to commit suicide after allegedly killing her husband, was rushed to the hospital for treatment by neighbours.


“Sequel to the above, the Commissioner of Police, Lagos State, CP Edgal Imohimi,  directed Crime Scene Detectives from the homicide section of the SCID Panti Yaba and Forensic experts  to the scene to aid in the investigation.”

According to information made available, the couple, both lawyers, were said to have married three years ago after the deceased divorced his first wife.

Although the deceased’s first marriage was also said to have produced a daughter currently schooling in the UK, the current marriage is said to be without a child.

Police preliminary interrogation of one of the neighbour’s revealed that the deceased called him on phone in the night before he was murdered, complaining that the wife was threatening to kill him with a knife.

The said neighbour, however, warned him to be careful.

The deceased was also said to have called his mother and his younger sister complaining of threat to his life that fateful night.

Recalling the recent death of a woman and her daughter in the hands of her husband at their Banana Island residence, CP Edgal advised couples to learn to resolve their matrimonial disputes without resorting to violence.