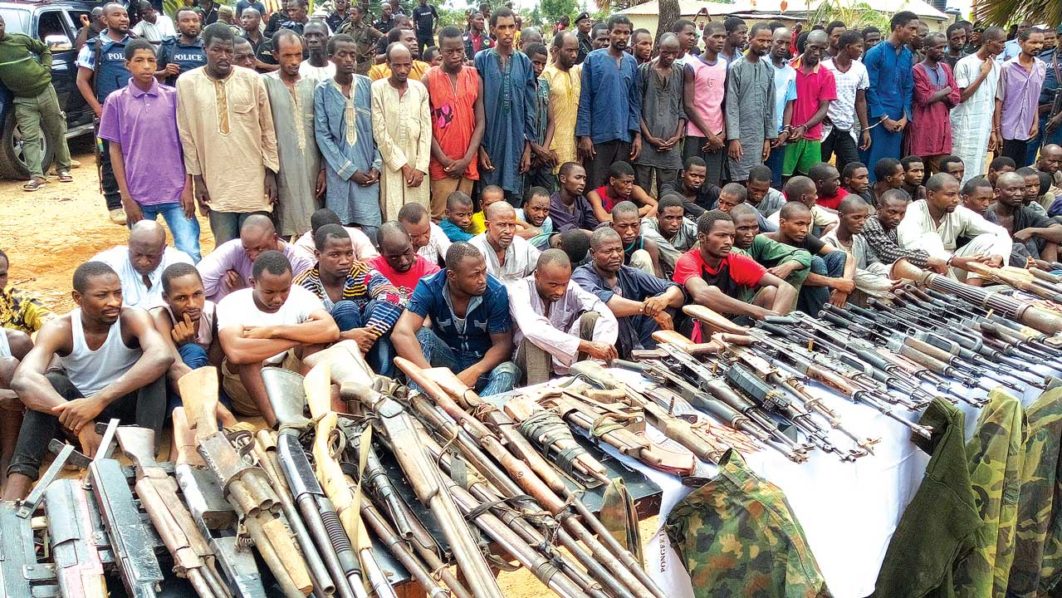 Ninety three suspected kidnappers terrorizing communities in many states in the North have been arrested, Force Headquarters announced yesterday.

They were arrested within the last two weeks by Operation Puff Adder launched to fight bandits in some northwestern states.

Force Headquarters spokesman Deputy Commissioner of Police, Frank Mba, announced this when he paraded the suspects yesterday at Katari village on the Kaduna-Abuja High Way. He said the arrests are a result of recent counter kidnapping strategy adopted by the police.

He said the suspects were arrested from different parts of the North-Central, North-Weste and North-Eastern parts of the Country. He said the operatives recovered one rocket launcher, 35 AK47 rifles, ten locally-made AK47 rifles and 500 live ammunition.

Mba said the operations leading to these arrests and recoveries were carried out by a joint team of policemen attached to Operation Puff Adder,  North-Central sector.

He said other operatives in the Joint Mission include personnel from the Police Mobile Force (PMF) the Counter Terrorism Unit (CTU), Special Protection Unit (SPU) and the Special Forces.

He said Police investigators backed by their counterparts in the Forensic and Technical Intelligence Units have commenced comprehensive investigation of all the Ninety-three (93) suspects arrested in these operations.


He said the investigations are aimed at tracking, uncovering and disrupting the sources of arms supply to the criminal groups, as well as identifying their collaborators, and bringing all involved in these heinous crimes to justice.

When Daily Trust asked Mba yesterday about the fate of other suspected kidnappers arrested and paraded by the police in the past, he said some have been charged to court, while others are in police custody on court orders.

He explained that the investigations of kidnapping are lengthy and complicated processes, adding that sometimes the police have to obtain court orders to hold the suspects.

Also, fielding questions from journalists in Katari, the Kaduna State Commissioner of Police (CP), Ali Janga said since he ressumed office he had liaised with the special operations teams set up by the IGP to ensure that the “Kaduna-Abuja road is safe, the Birnin Gwari -Kaduna axis too is safe, Kaduna-Zaria road is safe and Zaria-Funtua road is safe.”

He said: “As you followed the road, you have seen the security arrangement on the road, we assure the general public and Nigerians that the Kaduna Abuja road is safe.

“They can now start plying it, as we are on ground to ensure that we checkmate the activities of the hoodlums and all the criminals.”