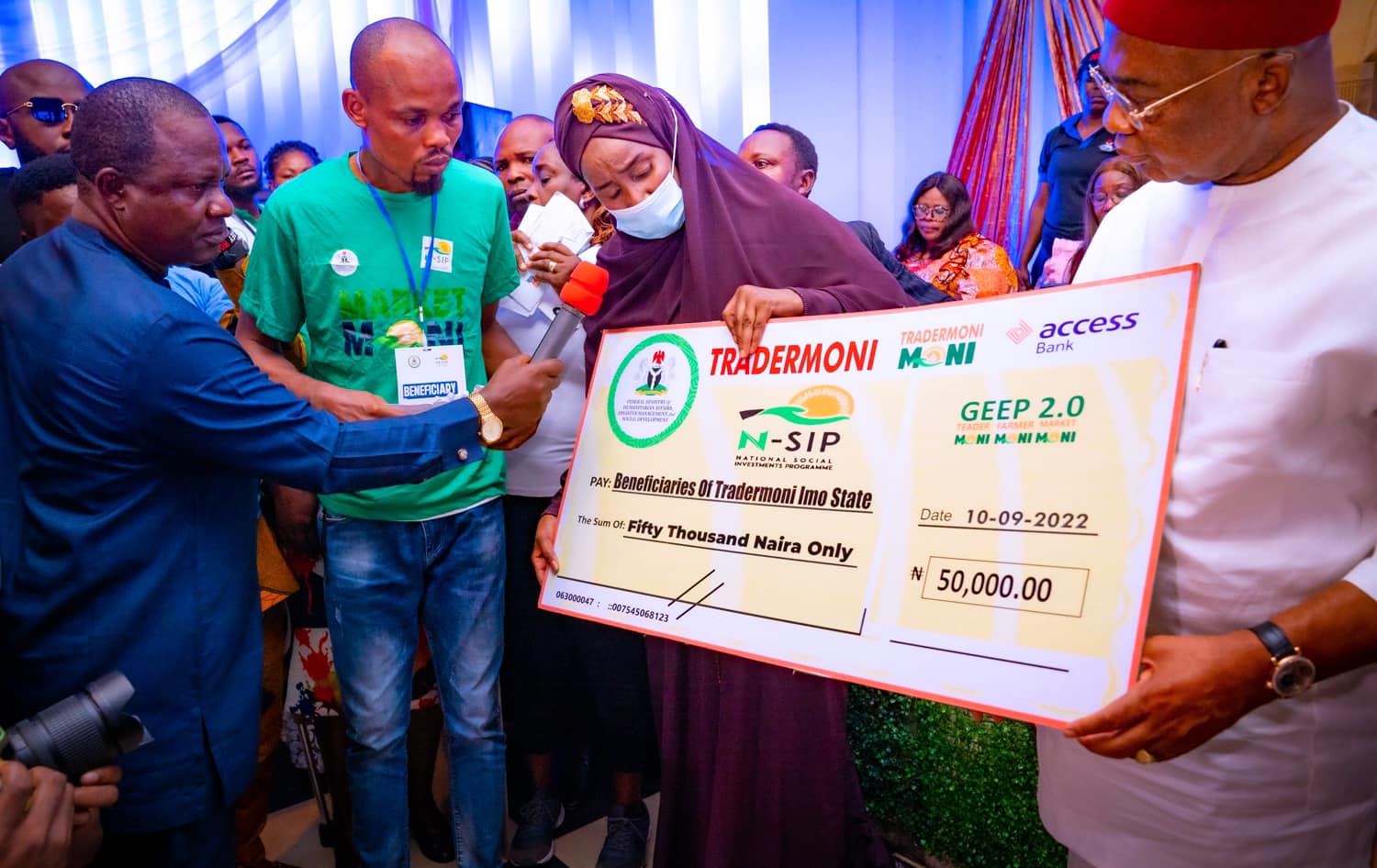 The Federal Government has begun the disbursement of Cash Grants for Vulnerable Groups in the Imo and Abia states.

The Minister of Humanitarian Affairs, Disaster Management and Social Development, Sadiya Umar Farouq flagged off the programmes on Saturday, Sept 10, 2022, at the Concorde Hotel Owerri, alongside the Digitized Payment for Conditional Cash Transfer.

At least 3,894 beneficiaries across the 27 Local Government Areas of the State will receive a twenty thousand Naira one-off Cash Grant for Vulnerable Groups in Imo state while

about 4,738 beneficiaries were selected for the Government Enterprise Empowerment Programme interest-free loans.

In her address, the Minister stated that the beneficiaries will receive loans ranging from N50,000 to N300,000 for farmers, petty traders, widows and youths.

“Today, l have come to Roll-Out the programme in the “Land of Hope” Imo State. Hence, successful beneficiaries of the GEEP proagramme will start receiving credit alerts from Access bank by God’s grace.


“This is a programme designed by President Muhammadu Buhari administration for vulnerable and low-income Nigerians who are involved in some sort of commercial activity or capacity but have never had the opportunity to access loans. It is meant to give priority to the most vulnerable in our society eg widows, youth, disabled and the displaced amongst others”.

In his response, the executive Governor of Imo state, Sen. Hope Uzodinma thanked President Muhammadu Buhari for the laudable empowerment programmes which he described as life-touching. The Governor asked for more Social Empowerment Programmes slots for Imo state to cushion the effects of banditry and insecurity in the state.

“We have felt the impact of the National Investment Programmes of the Ministry of Humanitarian Affairs. We are appreciative of the efforts of the Ministry in making sure that President Buhari’s dream of lifting 100m Nigerians out of poverty is realized. We also appeal to you to increase the number of beneficiaries in Imo state. Lately, the poverty index in the state increased due to banditry and insecurity.“

Minister Umar Farouq also presented engagement letters and monitoring devices to some of the onboarded ninety-five Independent Monitors and utensils for pupils under the National Home Grown School Feeding Programme.

In Abia state, the Minister who was represented by the Director of Special Needs, Mrs Nkechi Onwukwe also launched the GEEP 2.0 with 4,108 beneficiaries.

3,107 will receive twenty thousand Naira each as Cash Grants to Vulnerable Groups while twenty-seven Independent Monitors were on-boarded in Abia state and given engagement letters as well as monitoring devices.

5 Creative Online Businesses You Could Start in 2023

The Ultimate List of The Most Popular Online Business Ideas