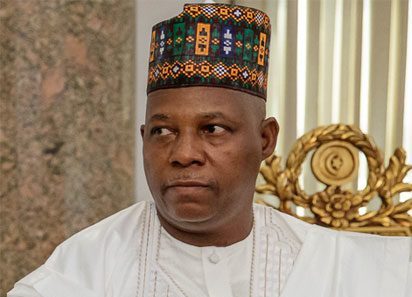 MAIDUGURI— Governor Kashim Shettima of Borno State, yesterday said the state  that had been under attacks by Boko Haram terrorists in the last 10 years, was  now safer  for  business  compared to states like Sokoto, Zamfara, Katsina including Abuja the Federal Capital Territory, FCT,  where issues of kidnapping and other related crimes remain unabated.

Shettima  who spoke when Chairman House Committee on Army, Rima Shawulu led other members of the House of Representatives on a courtesy call at the Government House, Maiduguri, said although there were pockets of attacks masterminded by degraded insurgents in some parts of the state,  it was lamentable that the insurgents were given much more publicity , than  Nigerian security forces.

According to him: “The military and other security agencies are doing their best in Borno State, the only problem now is the inadequate publicity accorded to our military operations. For example, when Boko Haram attacks and kill even one person, it will be celebrated on the front page of our newspapers, but when military kill dozens of insurgents and capture several others alive, such success against the insurgents will be published in a tight corner of our newspapers.


“Our Military is now overwhelmed with the increasing security challenges in some parts of the country, there is the deployment of soldiers in Zamfara, Sokoto, Katsina, and many volatile states of the federation despite paucity of funds and inadequate personnel. “Presently, Borno is safer than Abuja, Zamfara, Katsina, Sokoto and other volatile states of the federation. This is because in Borno, we don’t have cases of kidnapping, banditry as obtained in other states mentioned earlier. I want to appeal to this Committee to serve as a soul, driver and consciousness of our great nation, for peace to reign. We in Borno do not have issue of kidnapping or banditry, and I believe very soon we will overcome our security challenges.” He appreciated the committee for coming to Borno to sympathize and get first hand information on the ongoing military operations in the state. Earlier, Shawulu said among others,   “We are in Borno to sympathize with government and people of the state over the Boko Haram crisis. We went to Military cemetery and paid our last respect to the fallen heroes. We were also at different hospitals and sympathized with victims, but all I can appeal to you the Governor is not to drop your fighting stick against the insurgents. In the next two weeks, you will leave your office to Abuja and join us at the National Assembly, and I want you to carry that your stick even as a senator fight insurgents, as you have been doing before.”

Another Nigerian Mrs Victoria Obaze has Been Worn into Office as Civic Mayor of London Borough of Tower Hamlets, UK