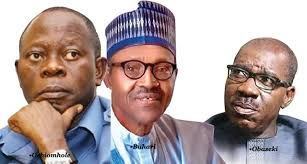 According to an APC insider,  the reason why Buhari sided with the law, sorry Gaidem was because Tinubu and Oshiomhole reneged on the agreement brokered by the late Abba Kyari on the Edo governorship tussle. During the first unsuccessful coup to remove Adams Oshiomhole as chairman of the party, the president asked Abba Kyari to mediate the situation and come up with recommendations. Note, Abba Kyari is the biggest supporter of  Governor Obaseki in the villa.

The agreement was for Adams to retain his position as chairman and Governor Obaseki will get his second term without stress. All parties agreed and Abba Kyari reported back to the president who also supported it. Death came and took the man who midwifed this agreement. The Tinubu and Oshiomhole camp thought they could seize the opportunity of Abba Kyari’s death to deal with Obaseki who no longer has Abba Kyari in the villa. This move infuriated the cabal and also the president who decided to clip Tinubu’s wings by siding with Giadom, a protégé of Rotimi Amaechi.

Npower Transitioning Batch A & B: Psychometric Test Past Questions and Answers PDF