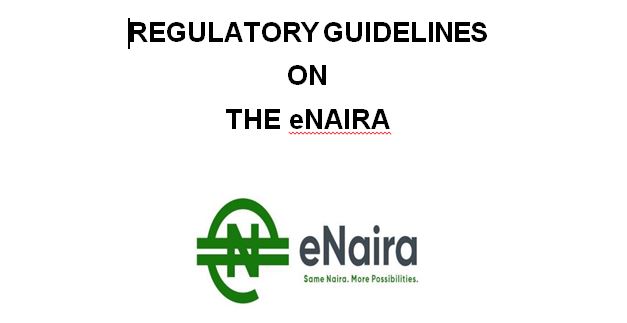 eNaira 2021 is a digital currency initiated by the Central Bank of Nigeria and approved by the Federal Government to help improve the monetary value, the currency will be using a medium of exchange and will be generally acceptable in the world.

The Central Bank of Nigeria, under the Central Bank of Nigeria (CBN) Act 2007 and the Banks and Other Financial Institutions Act (BOFIA) 2020, is empowered to issue legal tender currency, ensure financial system stability and promote the development of electronic payments system. The Bank, in furtherance of these mandates, hereby issues the following guidelines for the operation of the eNaira.

The eNaira is the digital form of the Fiat currency (Naira), issued by the CBN in line with Section 19 of the CBN Act. It is a direct liability of the CBN, a legal tender, and will form part of the currency-in-circulation.

The eNaira will complement cash as a less costly, more efficient, generally acceptable, safe, and trusted means of payment and store of value. Additionally, it will improve monetary policy effectiveness, enhance the government’s capacity to deploy targeted social interventions, provide alternative less costly channels for the collection of government revenue and boost remittances through formal channels.

The Guidelines seek to provide simplicity in the operation of the eNaira, encourage general acceptability and use, promote the cost of transactions, drive financial inclusion while minimizing inherent risks of disintermediation or any negative impact on the financial system.

The Central Bank of Nigeria, under the Central Bank of Nigeria (CBN) Act 2007 and the Banks and Other Financial Institutions Act (BOFIA) 2020, is empowered to issue legal tender currency, ensure financial system stability and promote the development of electronic payments system. The Bank, in furtherance of its mandate, hereby issues the following guidelines for the operation of the eNaira.

The eNaira is the digital form of the Naira, issued by the CBN in line with Section 19 of the CBN Act. It is a direct liability of the Bank, a legal tender, and will form part of the currency-in-circulation and will be at par with the physical Naira (that is 1:1).

The eNaira shall complement traditional Naira as a less costly, more efficient, generally acceptable, safe, and trusted means of payment. In addition, it will improve monetary policy effectiveness, enhance the government’s capacity to deploy targeted social interventions, and boost remittances through formal channels.

The eNaira wallet is required to access, use and hold eNaira. The eNaira will be exchangeable for other Central Bank Digital Currencies (CBDC).

The provisions of these Guidelines shall apply to all financial institutions and users of the eNaira.

This section gives an overview of the key components of the eNaira platform.

The eNaira shall be administered by the CBN through the Digital Currency Management System (DCMS) to mint and issue eNaira.

Financial institutions shall maintain a treasury eNaira wallet for holding and managing eNaira on the DCMS.

The FI Suite is the primary application used by the FIs to manage their digital currency holdings, requests, and redemption with the CBN.

The eNaira platform shall host eNaira wallets for different stakeholders.

The eNaira stock wallet belongs solely to the CBN and it shall warehouse all minted eNaira.

A financial institution (FI) shall maintain one treasury eNaira wallet to warehouse eNaira received from the CBN eNaira stock wallet. FIs may create eNaira sub-treasury wallets for branches tied to it and fund them from its single eNaira treasury wallet with the CBN.

eNaira Merchant speed wallets shall be used solely for receiving and making eNaira payments for goods and services.

eNaira speed wallets shall be available for end users to transact on the eNaira platform.

Two-factor authentication and other measures shall be adopted to ensure the security of eNaira wallet.

FIs shall integrate their backend systems to the DCMS for efficient transfer of eNaira between bank accounts and eNaira wallets.

AML/CFT checks for fraud prevention and detection shall apply on the eNaira platform.

The CBN shall exclusively perform the following roles:

Issue directives and review Guidelines on eNaira periodically as may be required.

The Financial Institutions are intermediaries between the CBN and customers. Their roles within the eNaira ecosystem shall include:

Consumers are the end-users of the eNaira and their roles are specified below:

This section describes the process of onboarding participants on the eNaira platform. The onboarding process shall vary based on the role of each participant.

The onboarding of FIs shall be done automatically by the CBN.

Merchants shall be onboarded by the FIs upon downloading the “eNaira Speed Merchant App” from the app stores and fulfillment of the following requirements:

MDAs shall be onboarded by the CBN upon receipt of the appropriate mandate.

Consumer onboarding shall be self-service upon downloading of the “eNaira Speed App” from the app stores and fulfillment of the following requirements:

NOTE: For a successful self-service enrollment on the eNaira Speed App, the mandatory requirements for some BVN details must match similar details attached to the consumer’s profile at the BVN database.

Consequently, there is a need for consumers to familiarize themselves with details of their BVN profile to identify and rectify gaps or stale information (especially email-address) through their banks.

The relevant information for a successful BVN validation check are:

During the onboarding process, users shall have the option to disclose whether the eNaira speed wallet being created will be operated for themselves or as trustees.

The TIN, NIN, and/or BVN shall be used as unique identifiers:

The following services shall be available to individual consumers on the eNaira platform:

Upon onboarding by the CBN, the following services shall be available to MDAs on the eNaira platform:

The charges for transactions that originate from the eNaira platform shall be free for the first 90 days commencing from October 25, 2021, and then revert to applicable charges as outlined in the Guide to Charges by Banks, Other Financial and Non-bank Financial Institutions.

Users of eNaira shall be subjected to a tiered structure with the transaction and balance limits as follows:

Documentation requirements for Tier 0 users are:

Documentation requirements for Tiers 1 to 3 are as stipulated in CBN Circular on Tiered Know Your Customer (T-KYC).

Merchants are expected to have existing bank accounts with FIs. Further requirements at the point of onboarding are:

FI’s Compliance Officers at the Merchant’s bank shall carry out final verifications and activation of their eNaira Merchant Speed Wallet.

The transaction and balance limits for individual and merchant eNaira wallets are shown below:

Financial Institutions shall be required to implement additional risk management measures as may be prescribed by CBN guidelines from time to time.

Roles and Responsibilities of the Stakeholders

The roles and responsibilities of the different stakeholders with respect to ensuring the prevention or minimization of loss following loss/theft of a user’s device or compromise of user eNaira speed wallet are stipulated as follows:

Banks shall provide the following services:

eNaira speed wallet users shall have the following responsibilities:

This section outlines the process for eNaira speed wallet recovery.

To recover eNaira speed wallets in the event of a loss/theft of a device, users shall:

In the event of a compromise of eNaira speed wallet, existing users shall:

FIs shall render returns to the CBN in line with the provisions of the Banks and Other Financial Institutions Act (BOFIA) 2020 and as may be specified from time to time.

Consumer Complaints in relation to the usage of the eNaira shall be referred to the Helpdesk of users’ preferred FI Helpdesk. If unresolved by the FI Helpdesk, it shall be escalated to the eNaira Helpdesk via 0800myeNaira (0800 6936 2472) or helpdesk@enaira.gov.ng for resolution.

For disputes where one or both parties are unsatisfied with the resolution, the issue shall be referred to an arbitration panel as provided under the extant Arbitration and Conciliation Act or as may be defined by the Central Bank from time to time.

The effective date of these Guidelines is October 25, 2021.

Kindly send us a mail at searchngr24@gmail.com for information on how to earn eNaira for Free, we got you covered as always. You can also visit eNaira community to learn more.

How to Send/Transfer Money Abroad with eNaira Mobile App

Which Cryptocurrency Mining Pool Should You Join?