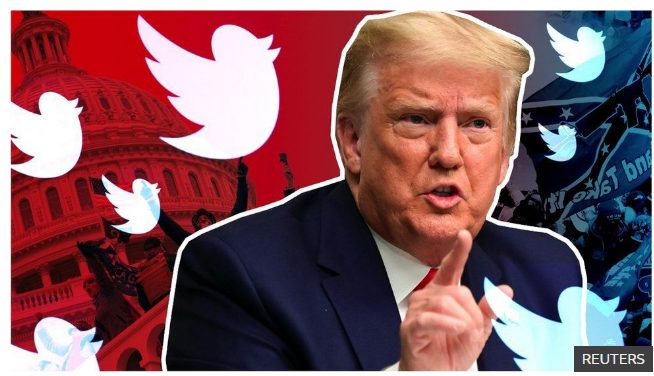 The National Archives and Records Administration (Nara) is working to create an official online archive.

But, according to Twitter, this will not exist on its platform, as would normally happen.

That is because he was permanently banned following the January attacks on the US Capitol.

First reported by Politico, Twitter confirmed the decision to the BBC: “Our teams have been working with NARA on the preservation of Tweets from @realDonaldTrump, as is standard with any administration transition and as we’ve done previously.

“Given that we permanently suspended @realDonaldTrump, the content from the account will not appear on Twitter as it did previously or as archived administration accounts do currently, regardless of how NARA decides to display the data it has preserved.”

Only administration accounts that were not in violation of Twitter’s rules are allowed to be archived on the platform, it added.

It is not clear where the former president’s tweets will live if not on Twitter.


The tweets of senior politicians and officials in the US are traditionally taken over by the archiving body to preserve them as historical records when they leave office.

So, for instance, Kayleigh McEnany, former press secretary to President Trump, reverted to her private account when she left the administration, but her tweets during her time there remain on Twitter with the message: “This is an archive of a Trump Administration account, maintained by the National Archives and Records Administration.”

When the policy for preserving social media posts was drawn up under the Obama administration, it stated that “wherever possible” materials should continue to be accessible on the platforms where they were created.

But social media posts made by former president Obama and his officials are also preserved on a website, which is searchable.

President Trump was banned from Twitter after he posted a series of tweets deemed to be in violation of Twitter’s rules on inciting violence. He tweeted almost daily during his presidency and saw it as a way to communicate directly with his nearly 90 million followers.

He has since said he plans a social media comeback “with his own platform”.

According to his adviser Jason Miller, it will be “the hottest ticket in social media”, and is due in a few months.

President Trump was also suspended from Facebook after the riots in Washington. The social network’s independent oversight committee is currently considering whether to allow him back.